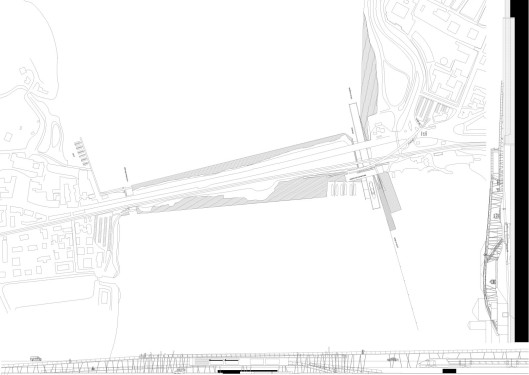 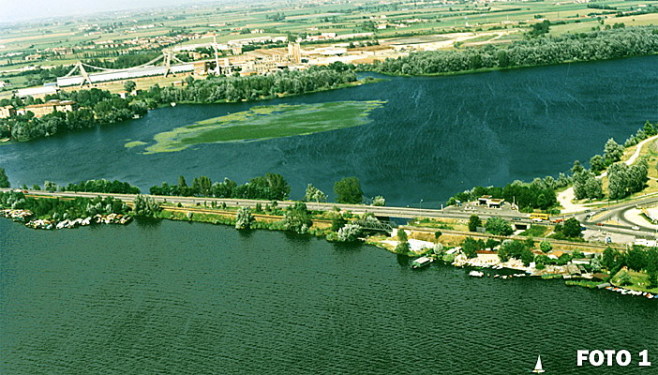 Competition for the Ponte dei Mulini

The aim of this proposition is to generate programs, activities and infrastructures to make the bridge a point of destination rather then a transit moment. The context is heavily influenced by the intense automobile traffic on the major national road crossing the bridge. This road, together with the railway tracks, became a cutting edge between the two side of the bridge. Therefore it is necessary to link, fluidly, all the urban destination under consideration, i.e. the two sides of the bridge, the reorganized parking lot near the hospital, on the Mantova side, the new parking near Cittadella and the recreated marina on the same side. From the city center of Mantova, through Via Trento or Via Porto, it is therefore possible to reach, by bicycle or by foot, on the two sides of the bridge, the town of Cittadella.

To allow this flow of people and bicycles there will be a number of ramps passing both above and below the tracks and the road. Specifically, where the ramp crosses the road on the Mantova side, a network of stairs, secondary ramps and structural pillars will spatially define the new gate to the city. The width of the ramps takes into consideration resting areas and benches, increasing the functionality of the ramp and creating vantage points to admire the city and the lakes around Mantova. This new system creates two additional fluxes, the pedestrian and the cyclist, summing up with the automobile’s and the trains’ ones. Moreover, another flux is added by introducing a lock, at the head of the bridge near Mantova.

Through the lock is possible to navigate from the middle lake to the upper lake, extending the navigation from the Po river through the Mincio river all the way up to Rivalta, near the Garda Lake. This new waterway makes Mantova closer to the Garda lake and will increase the turist attraction of the city, as a transit point between the Garda lake and Venice, along the Mincio and Po river.